In this post I will review a series of papers by Argyres, Lotito, Lü and Martone published in recent years. The main problem is to classify some four-dimensional $\mathcal{N}=2$ SCFTs, based on the possible geometries that can appear on the moduli space of vacua. Finding a geometry does not mean that a corresponding theory exists, but the complete classification provides constraints on the possible theories that can exist.

The authors focus here on the Coulomb branch (CB), and for simplicity they restrict their attention to the rank 1 case, by which they mean that the CB has complex dimension 1. The classification proceeds in two steps.

A priori, the classification strategy given above can fail at different points:

For more comments about this, and the interpretation of the table given above, see the Introduction of [1].

The classification of [1] given in the previous paragraph makes the crucial assumption that the CB is holomorphically isomorphic to $\mathbb{C}$, or equivalently that the CB is freely-generated. In [2], the authors examine what happens if this assumption is dropped, finding new internally consistent theories.

The most general CB geometry for an $\mathcal{N}=2$ SCFT is a bouquet of $N$ cones sharing a common tip. We have $$N>1 \Longrightarrow \mbox{The CB is not freely-generated} \, . $$ Under deformation, the CB becomes a non-compact genus $g$ Riemann surface with metric singularities (indicated as before by red dots, image taken from [2]):

Unitarity requires the scaling dimension of scalar operators to be $\geq 1$, and when the CB coordinate $u$ is the vev of such an operator, this translates into $\Delta (u) \geq 1$. But in presence of relations among the CB chiral ring generators, the coordinate is generically not the vev of an operator in the spectrum, and the bound no longer holds. When the constraint $\Delta (u) \geq 1$ is dropped, there are many more scale invariant conical geometries (Table taken from [2]): 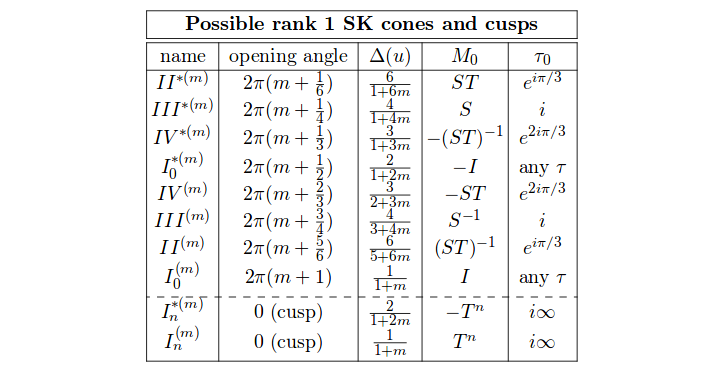 Now we have infinite families parametrized by $m \in \mathbb{N}$, and when $m>0$ the singularities are said to be of irregular type.

Finally, in [3] the authors look at what happens when gauging a discrete subgroup of symmetry in 4d $\mathcal{N}=2$ theories from the classification above. In that work, a CB geometry is denoted $[K,F]$ where $K$ is the Kodaira type, and $F$ is the flavor symmetry given in the Table above. Also, one indicates the presence of a chiral deformation parameter of scaling dimension $\delta$ by $\chi_{\delta}$. Then, one can gauge discrete automorphisms of the symmetry $F$. For instance, the theory $[I_0^*,D_4 \chi_0]$ (which is nothing but the $\mathfrak{su}(2)$ theory with 4 flavors) gives birth, gauging a $\mathbb{Z}_2$, to a theory $[III^*,B_3]$, and gauging a $\mathbb{Z}_3$ to $[II^*,G_2]$. Then one can study the RG flows between these theories, and obtain the following Table, taken from [3]: 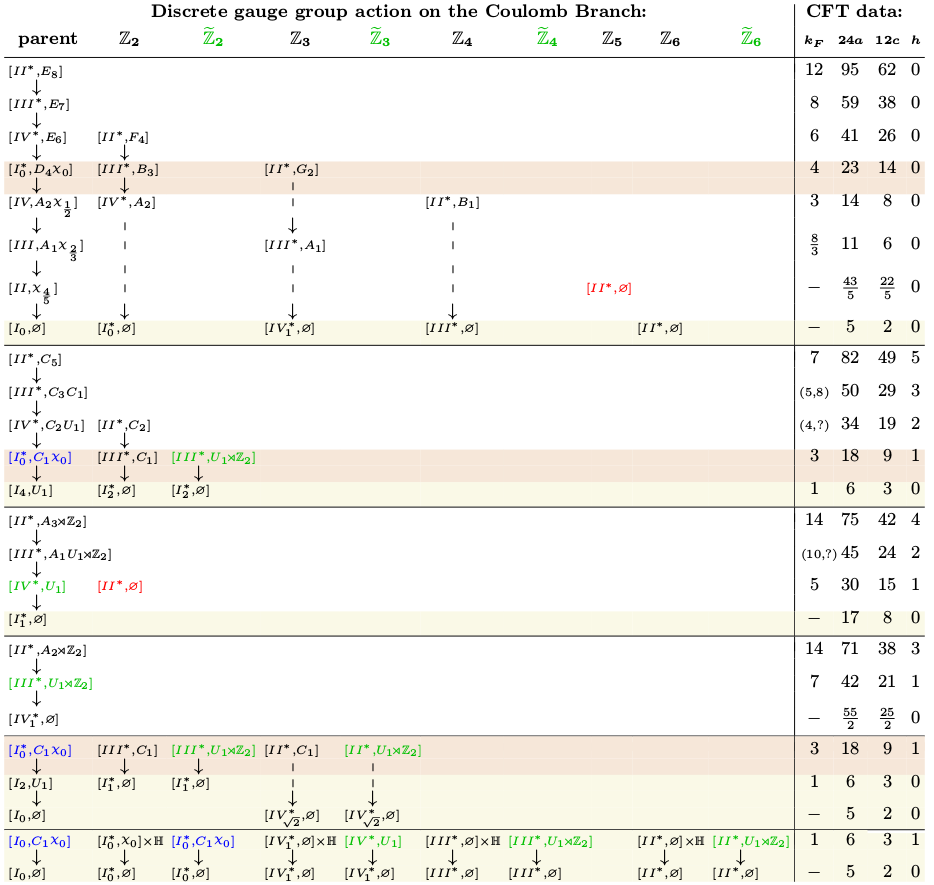 In many cases, the gauging of the discrete symmetry must be combined with an appropriate gauging of R-symmetry and $SL(2,\mathbb{Z})$ transformation in order to preserve $\mathcal{N}=2$ supersymmetry. Note that a given geometry can appear several times in the Table, this just means, as noted previously, that a given CB geometry can correspond to different theories (and in this case, it can correspond to a parent theory and a daughter theory).

Importantly, as far as I understand, all this discrete gaugings are still holomorphically equivalent to $\mathbb{C}$, and therefore freely-generated. In that sense, it is something different than what is done in [4].